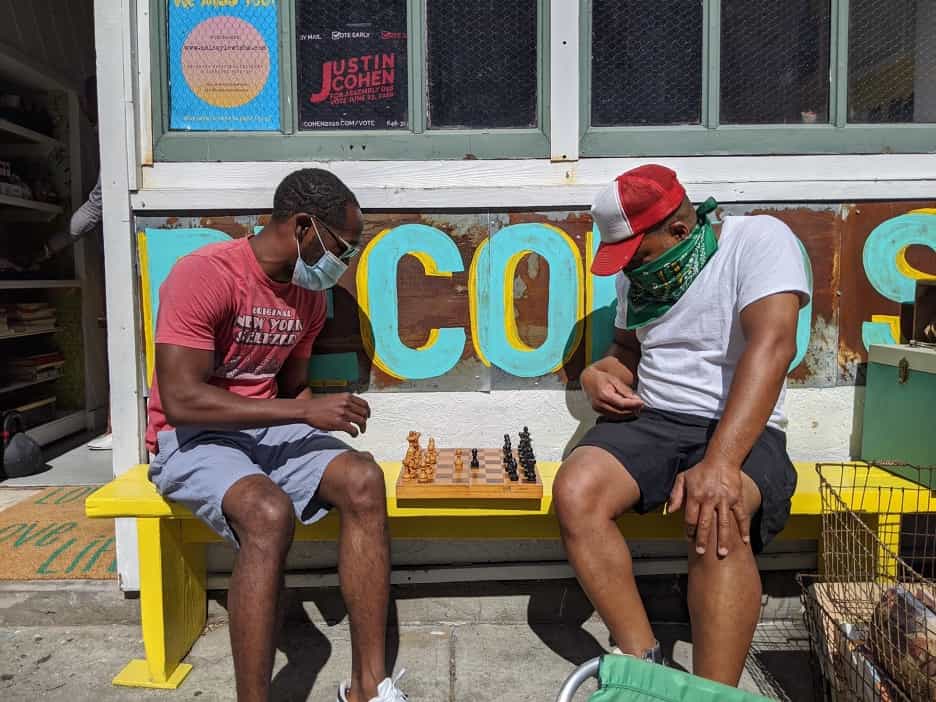 “Which One of You Is Kasparov?” Martin Squares off against Rashid on the bench beside the shop.

June is a handful: It’s Gay Pride. We’re still in the midst of fighting COVID-19. The Supreme Court is handing down life-changing decisions every Monday. And we’re in protest. Perhaps for the first time in American history there is a reckoning – demanding – that #BlackLivesMatter.

Coronavirus and the need to draw down our economy has disproportionately affected Black-Owned Businesses. So, suddenly, there are listicles ad infinitum offering how we can vote with our wallet.

But few businesses are as community-centered as Bed-Stuy’s Halsey & Lewis. Three and a half years ago, Martin Brewer opened his hard-to-classify store at – you guessed it – the corner of Halsey & Lewis. Brewer was no stranger to having a bricks and mortar storefront. He had a space in Park Slope in the nineties when he first moved to NYC. “I had an apartment on Eastern Parkway directly across from the Brooklyn Public Library and a few paces from the Botanical Gardens. I could never understand why it was undesirable.” And then, suddenly, it was.

Brewer’s fascination with found art and vintage decor actually dates back even earlier. He recalls playing in a nearby junkyard in Phoenixville, just a few heartbeats from Philadelphia’s Main Line. At some point - somewhere around the tender age of nine – a light bulb went off: He’d find castoffs with buyers in mind. Not even a teen, and he was engaged in arbitrage. Martin was, and is, too cool for school.

At Halsey & Lewis, Brewer – with his partner Sonya Farrell – do more than transact business. Whether it’s the artists they support – from up-and-comer Julian Joseph Kyle to Father’s Day cards for Black Dads. Every item feels like nine-year-old Martin is still at play – pairing a good to its ideal buyer. Much of their traffic is happenstance: “They come in because they HEAR the music or SMELL the sage.”

With Halsey & Lewis centered around community, its activism and its service are inseparable from the store’s character. Right down to the curated vinyl playlist (with its collectibles for sale on Discogs – including James Brown’s Funky President.) On the store’s Instagram, the store highlights artists, poets, and musicians, both iconic and hyperlocal. Here, Nina Simone reminds us in The Revolution that “The only way that we can stand in fact is when you get your foot off our back.” 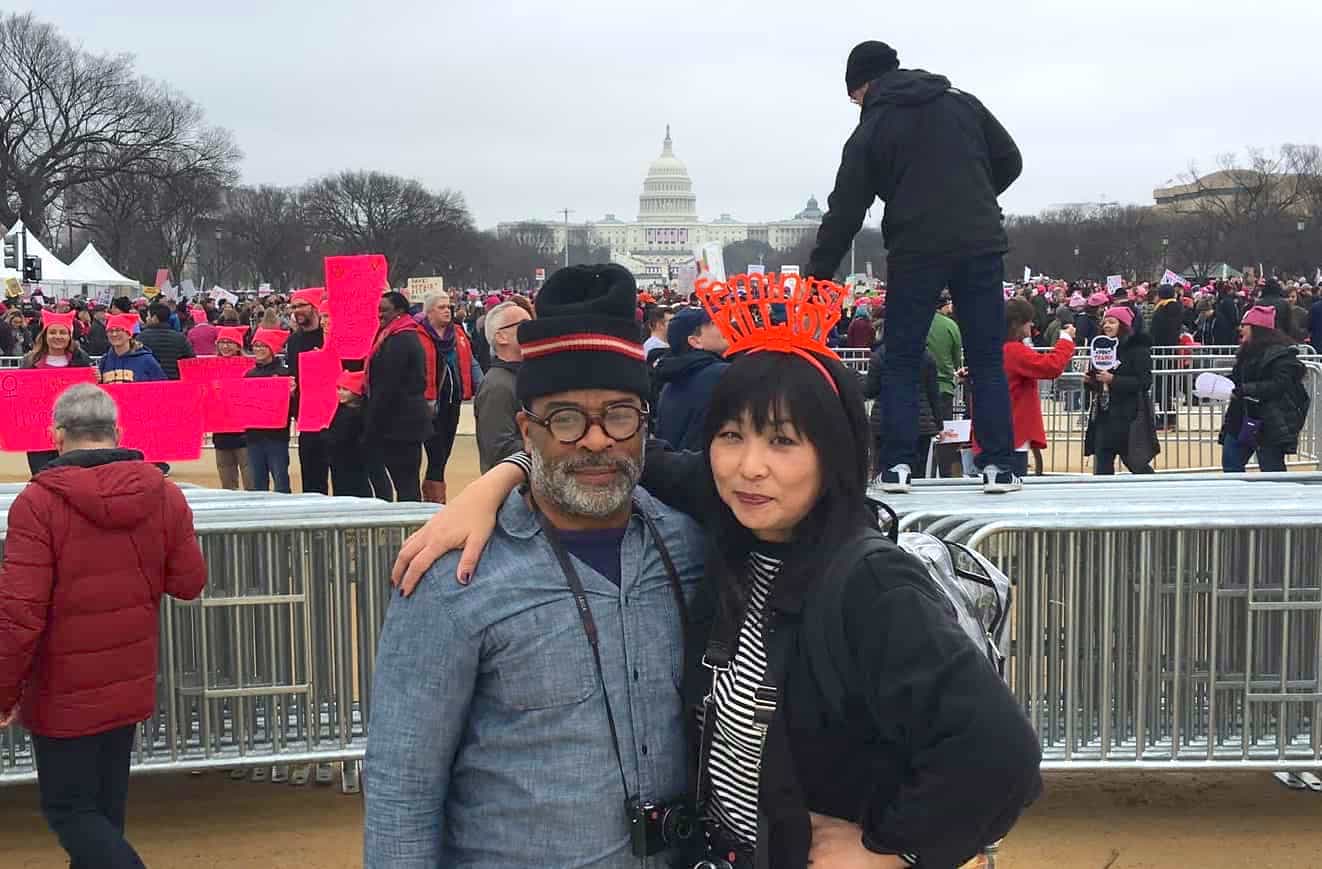 Martin and Sonya were among the millions who showed up for the D.C. Women’s March.

“We decided to make a weekend out of it. I remember that our hotel lobby was a trip, packed with Pink Pussy Hats, as well as Crimson MAGA caps. We marched right into the National Museum of African American History and Culture (the Blacksonian). It was such a draw-dropping experience. It blew our MINDS. We walked out and decided every kid in America needs to come.” The two launched “Let’s Get On The Bus” as a 501c3 and filled busloads of youth from Children of Promise (which supports children of incarcerated parents); Girl Scout Troop 6000; as well as children in the NYC shelter system.

With Sonya back at school (a Master’s in Social Work at Columbia) LGOTB is on hiatus, but need has no schedule.

While Halsey & Lewis is complying with New York’s “pause order” – offering contactless delivery and curbside pickup, as well as digital shopping – at the beginning of the outbreak Sonya took stock: She had three boxes of gloves, ten masks and thought, “I can take care of my own family. But what if each of my friends contributed — pooled our resources to help others? Her instinct to Share The Wealth quickly became, #ShareTheHealth. Adds Martin, “People these days are looking for ways to help.” 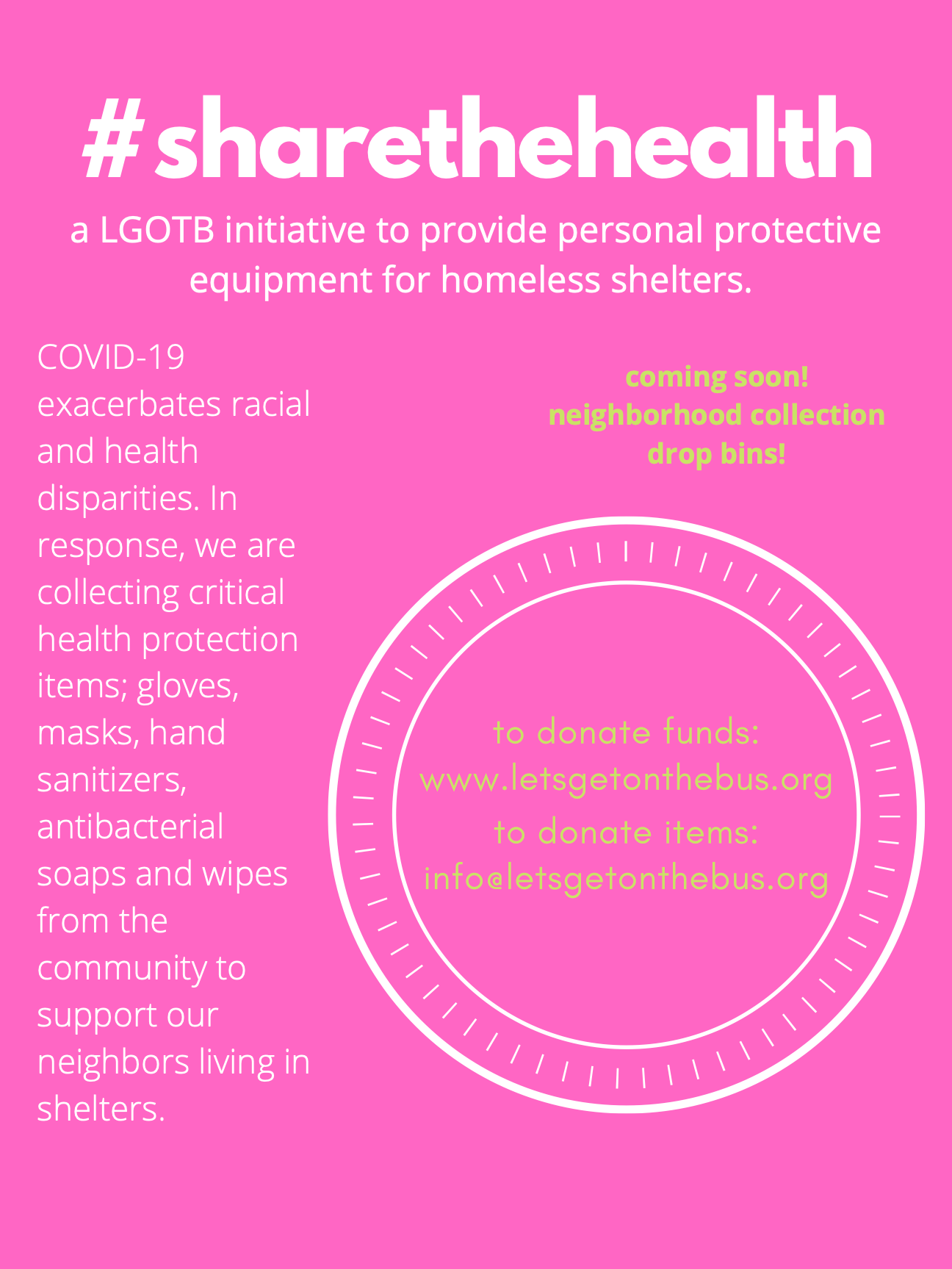 Share The Health is accepting donations for PPE, both money and masks, and making sure that folks who are housing insecure or homeless have the protection that they need.

Sonya notes that since the protests began that interest and activity on their website and Instagram have gotten a big boost. Asked if folks should make a special effort to support Black businesses, Martin flashes a wry smile: “This time is only right. I’ve always supported white businesses. We should have been doing it all of the time. Black people have never had a problem buying or selling to white people…”

Reach out to Halsey & Lewis: